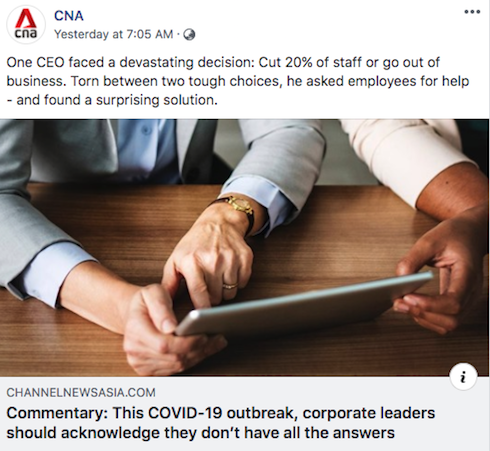 Commentary: This COVID-19 outbreak, corporate leaders should acknowledge they don’t have all the answers

SINGAPORE: "I'm a traditional banker. I don't know tech. But when I landed the role, it turned out to be an enabler.” A leader who heads digital transformation at a major bank once said at a panel discussion I moderated.

Had I come from a tech background, I would have operated in the realm of the possible, she added.

“However, because I did not deep dive into the technology aspects, but looked at what customers wanted, I could focus on the desirable.”

Her embracing of an “I don’t know” mantra struck a chord. These were not words you expect to hear from a seasoned corporate leader.

This deeper lesson can be applied to many aspects of corporate life - that “I don’t know” can be powerful words that unleash focus, creativity and collaboration.

The trouble is acknowledging our limitations goes against the grain of everything we have been brought up to believe.

We were told to study hard to ace exams and avoid not knowing in school.

When we entered the working world, we were hired, rewarded, even promoted for our knowledge and what hints of competence knowledge provides.

Yet, when we take on the mantle of leadership, this quest to know everything can be counter-productive, even disempowering, in a world of constant change and rapid disruption, where adapting requires acknowledging we do not have ready-made solutions to fresh challenges.

Don’t get me wrong – by no means am I advocating for ignorance or excusing lazy leadership. Yet not enough has been said about what is lost when leaders try to be subject matter experts.

KNOWING CAN KILL INITIATIVE AND INNOVATION

Yet micromanaging is everywhere. When we believe we know everything, we are unlikely to allow others to share their perspectives.

This not only prevents new innovative ideas from being surfaced, but also inhibits the professional growth of people we work with.

I once coached a leader who was so beholden to knowing everything she could even complete her staff’s sentences. Naturally, her team soon stopped speaking up and went along with whatever she said. Then she complained they were not proactive and did not offer any good suggestions.

Steve Yeggie, Head of Engineering, Ads and Monetisation at Grab once shared that the key to fast innovation is Grab’s “go to the ground” mantra.

Leaders don’t assume they know everything and so are expected to see how things work on the ground and ask questions. Grab also constantly encourages employees to get involved with Grab users, to understand customer needs amid new changes to pivot quickly, he said.

When we believe we know everything, we are less likely to ask questions. We tend to talk more and listen less.

While talking may clarify thinking, it is listening that helps us learn, discover more information and options, and allows us to cast a wider net of diverse solutions.

HAVING TO KNOW EVERYTHING GENERATES UNDUE STRESS

As an executive coach and transformation consultant, I work with many stressed-out leaders. When a digital-immigrant leader has to manage digital-native staff and steer the organisation in increasingly uncharted waters, they may inadvertently take on too much responsibility for the success of their teams instead of working in a smarter way to empower staff.

As the world becomes increasingly digital, with new technologies and concepts like blockchain, artificial intelligence and cloud computing reshaping our world, leaders will lead people smarter than them, in roles that did not even exist just a few years ago.

Trying to cope with this and also aiming to be domain matter experts in a dozen different disciplines can be a futile quest.

For too long, we have bought into the narrative of the invincible, all-knowing leader. This style has its time and place, however, its vulnerabilities have been exposed as the world battles COVID-19 – the biggest disruption of this age.

There have been leaders who opted to project a veneer of absolute knowledge and control over the situation, like UK Prime Minister Boris Johnson and US President Donald Trump, who were later lambasted for bungled messaging, covering up the truth and delayed responses that cost thousands of lives as the outbreak worsened.

In contrast, leaders like NZ Prime Minister Jacinda Ardern and Singapore Prime Minister Lee Hsien Loong, who were upfront about the unknowns, and their plans to mitigate the uncertainty, managed to restore public calm and confidence.

Enlightened leadership is having the courage to acknowledge we do not know everything, and the clarity that we do not need to, if we have the right team with the expertise working on it and can count on them in critical areas.

PEOPLE MORE ENGAGED IF THEY CAN CONTRIBUTE

Facing the impact of COVID-19, payments firm Gravity’s CEO Dan Price faced a devastating decision in late-March: Cut 20 per cent of his people or go out of business. Torn between two very tough choices he asked his employees for help.

“I think bosses should always talk to their employees before making any big decisions,” Price tweeted. “They might surprise you with ideas you hadn't thought of. At the least, transparency makes everyone feel like they're in this together.”

Responding to him, Gravity employees took ownership of the decision: 90 per cent offered to take a temporary pay cut, and 13 per cent were willing to cut half their pay, enabling everyone to be employed for up to a year or more.

Strong leaders know asking for help holds the key to harnessing the combined strengths of their teams, and is not a sign of weakness.

Research published in Harvard Business Review shows how people are most engaged when they are able to contribute. Gallup’s study on employee engagement highlights people feel more engaged when they feel their opinions count and they have opportunities to learn and grow.

Yet, leaders who feel they need to have all the answers ultimately limit the contribution of the team. Instead, by asking for help, like what Price did, a leader demonstrates he values people’s expertise and creates the space for them to co-create solutions.

‘I DON’T KNOW’ BRINGS OUT CREATIVITY AND INNOVATION

When you think of the most iconic inventions, the ones that have made the biggest impact on the human race, their starting point was not to build on existing knowledge, but to re-imagine possibilities.

Life-changing inventions such as the light bulb, airplanes, even the first vaccine, were initially ridiculed. Undeterred, the inventors went against conventional knowledge.

This is an important mindset needed to nurture innovative future-ready teams.

While past experience is invaluable, it is also the Achilles heel for most leaders, since it can quash novel ideas and innovative thinking. It may make us pre-judge ideas.

Less experienced employees are often the force behind innovation simply because they are less bogged down by what has worked.

This was the breakthrough story in self-driving cars. The US government failed to get traction in the production of autonomous military vehicles by partnering with the big three auto manufacturers for five years.

So the Defense Advanced Research Projects Agency held an open-to-all competition for a self-driving car that could complete a course in the Mojave Desert in less than 10 hours in 2004. A team of engineering students from Stanford University won the US$2 million prize and propelled the first big push into autonomous vehicles.

In a world replete with information overload, authenticity is the currency of trust. Studies support this, including the Million Dollar Round Table Harmony survey which discovered that customers rank “honesty” as the most important trait for financial professionals, above “knowledge” and “delivers results”.

The power of candour is further emphasised by Jim Whitehurst, CEO of cybersecurity company Red Hat. “Being open about the things I did not know actually had the opposite effect than I would have thought. It helped me build credibility.”

It is vital, however, we understand that the opposite of knowing is not ignorance, but learning.

Riding the “I don’t know” train can be scary. However, when we embrace our curiosity in people and things, we tap into a courage to fully unleash the power of not knowing.

This invites people to jump in with us. It enables us to fully leverage the power of the collective genius, creativity and passion of teams.

Book Karen For Your Next Event